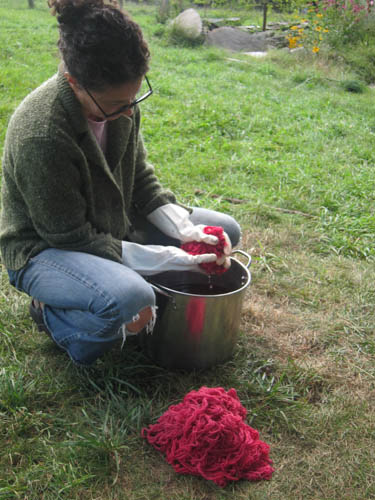 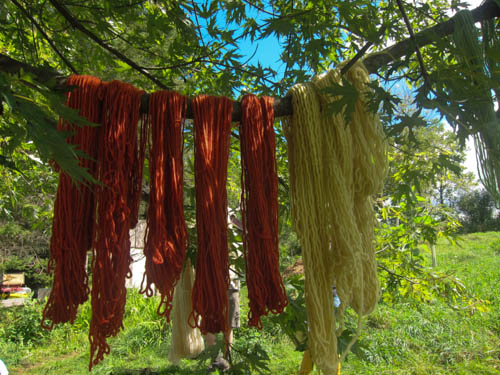 I spent yesterday afternoon riding the wagon behind Martha’s baler, hauling bale after bale off the metal chute and stacking them behind me like child’s blocks. There were 679 bales in total and I couldn’t help but do the math: 679 x 40-pounds = 14 tons of hay. (Actually, it doesn’t: It actually equals only 27,160-pounds of hay, but I didn’t have a calculator in the hay field and I was too labor-addled to do the hard math in my head, so I rounded the 679 to 700). Fourteen tons of hay lifted, carried, and stacked. I looked down at my arms and discreetly flexed a bicep. It was less impressive than I’d hoped.

I have not been riding the wagon much the past couple haying seasons. Steven has pretty much taken over that job, leaving me to ferry wagons back and forth to the barn, where Penny, Roman, and the boys unload. I don’t mind ferrying wagons; I like driving tractors and ferrying wagons is all about driving tractors, and in particular the old iron that Martha favors and which is impeccably maintained by her friend Don, a Vietnam vet whose tattoo count rivals the word count of the longest sentence I’ve yet to hear him speak. It occurs to me that I could learn a thing or two from a guy like that.

I’d missed being in the field, the metronomic whump and clatter of the baler, Martha on the Deere, cupping her cigarette from the breeze, the fatigue slowly rising in my body and the boys, having abandoned their post in the barn, racing their bikes down the hills of the fresh-shorn hayfield. I can hear their shrieking over the machinery and I think how can I want anything more than this? I can’t. I don’t. 28,000-pounds of hay in three-and-a-half hours. Shrieking boys. Cigarette smoke and diesel exhaust. The whump and clatter and the remembering of all the little tricks of balance and timing.

You know what? I didn’t drop a single bale.

Our layers are in a bit of a slump right now – a few molting, a few getting long in the beak (that’s a joke, right? because the saying is actually “long in the tooth” but chickens don’t have teeth, so I wrote “long in the…” Oh, never mind, you got it), and the new pullets are not yet earning their keep. We’re getting four, maybe five eggs a day, which would be fine if we weren’t an eight egg-per-day family. And that’s if we’re on strict rations, as we are now. Unrestrained, we’re probably in the double-digit-per-day range.

This is all merely a long way of saying that last night I found myself driving to a friend’s place to pick up a couple dozen supplemental eggs. It was a nice evening, a little muggy and warm perhaps, but you don’t go complaining about muggy and warm in September because you know that pretty soon there won’t been any muggy and warm to complain about for, oh, eight months. At least.

So on the way home I was listening to the Ted Radio Hour, window open to the deliciously muggy and warm air, and lo and behold what should the topic be? Why, learning, that’s what. And even more to the point, how kids learn. My ears perked up some, let me tell you.

I was particularly intrigued because earlier in the day I’d been a guest on a radio show and one of the listeners had called in to suggest that I’m not actually qualified to teach my children. Because, you know, I’m not a licensed teacher and furthermore, I didn’t even finish high school, which I guess most people think is a pre-requisite to knowing something about teaching. I’ve even had people tell me that since I didn’t finish high school (not to mention college ) I’m not educated, which always irritates me a bit. As if there were no other ways to become educated.

Anyway and all, I didn’t have a particularly snappy response to the caller, though I sure tried to summon one forth. I think I said something about disagreeing with her, that in my experience kids don’t need someone to teach them, that they’re perfectly capable of learning in the absence of formal instruction. Truthfully, it was a fine answer. I didn’t stumble over it and it was honest. But I doubt it changed her mind even a little bit, though in my experience, you don’t change someone’s mind during a call-in radio program no matter how convincing you are.

Anyway and all again, the first segment of the TED radio hour featured a fellow named Sugata Mitra. I’m gonna try and keep this short, but basically what Sugata did was install computers in public places in small Indian villages. And then what he did is precisely nothing. He explained nothing, he demonstrated nothing, he taught nothing. And what he observed is that when left to their own devices, children could teach themselves the most amazing things. Like advanced molecular biology. Like foreign languages. Like advanced molecular biology in foreign languages.

To any of you interested in childhood learning, whether you believe that self-directed unschoo… er, immersion learning works or not, I highly recommend listening to the segment. Sugata seems like a delightful fellow and his observations are fascinating and I have no doubt they would extend to adults, if only we could muster the innate confidence and love of learning that resides within our children.

Sadly, I think, many of us have lost confidence in our own ability to learn without formal instruction, and I believe it is from this place of uncertainty that we question our own qualifications to guide our children’s learning. Which, as Sugata so eloquently points out, is actually less about guiding than simply getting out of the way. It’s not about making learning happen, it’s about making room for learning to happen.They sound a lot alike, don’t they? But the truth is, they’re two very different things.